Two Kates, Two Answers. A look at the final speech in both texts. 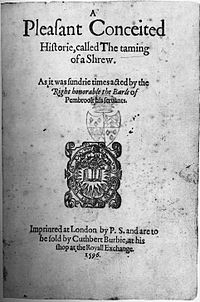 In my last post, I wrote about what a “bad quarto” is, and how different printings of plays by Shakespeare can be wildly different. In the case of The Taming of a/the Shrew there is not even any scholarly consensus on whether The Taming of a Shrew was written by Shakespeare, or which play came first. Today I’m going to look at the ways in which the two plays are different in a very particular passage.

The two plays follow the same plot for the most part—the characters (excepting Sly and Kate) have different names but most of the scenes run parallel to their counterparts in the other play. In the final scene of the play (in both versions) Kate and her husband return to Kate’s father’s house for the wedding celebration of Kate’s younger sister(s). At one point the men make a bet about whose wife will come when he calls, and only Kate comes when commanded, promptly obedient, and fetches the other women as well. Kate’s husband then asks her to instruct the other women how they should treat their husbands, and in both versions Kate gives a long speech, but the content of those speeches is quite different. In The Shrew Kate gives a longer lecture, and covers a broader range argumentation over full forty-four lines. In A Shrew Kate has only 29 lines and confines her argument to a religious premise that women are inferior by design and by their own actions and history. Here are the two speeches in full, we’ll discuss them in closer detail in the following paragraphs. 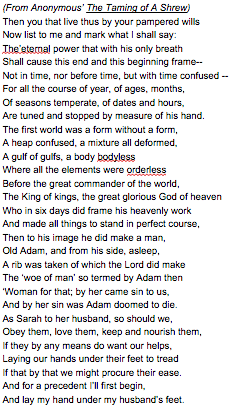 Kate in The Shrew gives her speech mainly comparing husbands and wives to kings and subjects. In her introduction (where she insults the women for their disagreeable facial expressions) she titles their husbands with the terms, "thy lord, thy king, thy governor." Throughout the speech she gives several reasons why women should not fight their husbands. In the first place, it's unattractive (with the troubled fountain analogy), secondly it's wrong (women owe their husbands obedience), and thirdly if you try to fight them you'll lose because they're stronger ("our lances are but straws"). 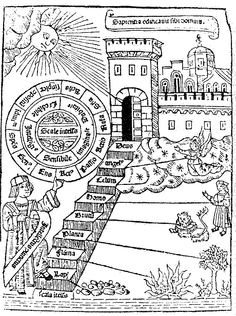 Kate in A Shrew gives a bit more of a complex argument, even though she does it in a shorter space of time. Instead of merely asserting that husbands are the lords of their households, she gives an elaborate invocation of God as the creator of all things and bestower of power. Just as God creates, he also bestows order, gives bodies, and in his good will, woman became the "woe" to man, and therefore for her sin Adam died. In response women should behave should Sarah, Abraham's wife in the old testament, and their defining feature should be their obedience to the authority of their husbands, service to them in every way. Kate ends her speech (as in The Shrew) by offering her hand beneath her husband's foot. This speech reminds me of two speeches by Shakespeare's women. In the courtroom scene in The Merchant of Venice Portia answers Shylock's question about why he should be merciful by broadening the argument to show how God is merciful. Isabella, in Measure for Measure also talks about authority as coming from God. By contrast Isabella does not link authority and virtue, and unlike Anonymous' Kate, Isabella points out a certain fragile and arbitrary quality to authority. For Isabella authority is something you are dressed in, but for Kate, the ordering of the chain of authority is set in the epic language of creation and the cosmos.

At the level of the text, both of these speeches make me feel a little sick. It upsets me that these ideologies were ever considered valid, and upsets me still more that I continue to see similar sentiments expressed in our culture today. But I stand with Tony in considering the shorter of the two speeches to be the less misogynist of the two. There are many less debasing insults to women in the version from A Shrew, and the justification, while not one I stand with, is at least succinct and specific in its argument. However, like every text intended for performance, the words themselves only convey a fraction of the meaning when performed onstage. Either of these speeches is a wildly different statement depending on Kate's state of being. Has her husband broken her so she's speaking out of brainwashing? Is she showing up her sister? Has she learned the cultural expectations so well that she can perform them on cue whenever it's advantageous to do so? Is she wildly, passionately in love? I do not know what Tony plans on doing with this scene as he directs it, but I know that the audience is in for a unique view of this story. Whatever interpretation of the scene the actors present, the text they will speak is so rarely performed that it will be well worth the audience's attention.
Posted by Clara at 12:09 PM