How Lost is Love's Labour?

As Bad Quarto Productions stands ready to preview its production of Love's Labour's Lost: The First Quarto, our second production of the 2017 season, I keep coming back to something that's always nagged me about this comedy: how lost is love's labour really? Ferdinand and his men don't get to marry the Princess and her ladies at the end of the play as they had hoped, but they've all extracted a promise to marry when the gentlemen have made certain proofs of their characters to those ladies. 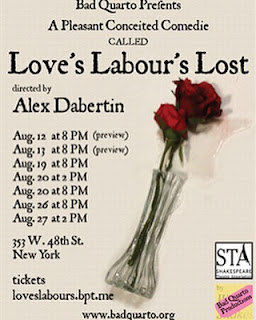 In early modern London, a promise to marry was legally binding in a way that modern marriage proposals are not. The abundance of pregnant brides in the period (including Anne Hathaway) is partially explained by the religious allowance that, for a marriage to be legitimate before God, all the couples needed to do was to make a solemn promise to each other before God: neither the church nor state were necessarily involved in what could be considered a private matter (Dolan 622). These promises were legally enforceable in church courts, however, and it seems unlikely that the sober-minded Princess of France and her equally pragmatic ladies would make such promises in vain, even if state marriages were of a different order than common ones (Dolan 622). The labours of love that Ferdinand and his men are enjoined to have not even begun by the play's conclusion, but the rewards for their successful completions seems certain.

As for the labours that Ferdinand and his men have already undertaken? The Princess (by then Queen) and her ladies interpret them:


At courtshyp pleasant iest and courtecie,
As bombast and as lyning to the time:
But more deuout then this our respectes,
Haue we not been, and therefore met your Loues,
In their owne fashyon like a merriment.
(TLN 2738 - 2742)

Ferdinand and his men have presented their love as trifles (literally), not as something sacred, and the ladies have replied in kind. As is typical in Shakespeare's comedies, as we see see in virtually all of them, women are masters of the art of love, and serve as tutors to their undergraduate gentlemen.

What makes this lesson particularly poignant is that, in director Alex Dabertin's analysis, the King of France sends his daughter on this embassy to Ferdinand with the idea of a political marriage in mind. This reading is in keeping with Boyet's lines:


Now Maddame summon vp your dearest spirrits,
Cosider who the King your father sendes:
To whom he sendes, and whats his Embassie.
Your selfe, helde precious in the worldes esteeme,
To parlee with the sole inheritoure
Of all perfections that a man may owe,
Matchles Nauar, the plea of no lesse weight,
Then Aquitaine a Dowrie for a Queene.
(TLN 492 - 499).

And it is certainly within the realpolitik of the period. But at the end of the play, she is Queen of France, and not merely princess, and knowing the professed truth of Ferdinand's love, is able to force him to Biblical terms: if Ferdinand truly loves her, following the example of Genesis 29:20, his year of labour will only seem a few days, and they will enjoy more than a political match.

That said, one could plausibly read the title as a promise that Ferdinand and his gentlemen will fail in their yet-to-be-performed labours. How you view the loss of love's labour in the play is, in this way, a measure of your own feelings as to the truth of Ferdinand, Longaville, Dumain, and Berowne's love.