The Ballad of Dido - Poster 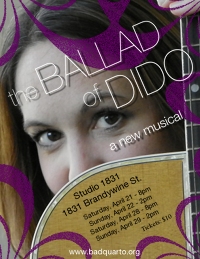 Hey everyone, check out the poster for our Philadelphia performance! It features our own Rachel Quagliariello.

If you're a business and would like to get your logo on the poster, or sponsor the production in any way, please send an email to [tony (at) badquarto {dot} org]

Posted by Tony Tambasco at 4:36 PM No comments:

The Song of the Ancient Queen

While you're enjoying your Valentine's day, we here at Bad Quarto Productions are excited to be getting back into show mode for our new musical The Ballad of Dido, which will perform this April in Philadelphia PA and Staunton VA.

The Ballad of Dido tells the story of Dido, the mythical queen of Carthage, and her love affair with Aeneas, the hero of the Trojan War who would go on to found a kingdom in Italy that eventually became the Roman Empire. Based on Vergil's Aenead, Marlowe's Dido, Queen of Carthage (which is, coincidentally, part of the American Shakespeare Center's Actor's Renaissance Season here in Staunton this Spring), Ovid's Heroides, and other classical sources, The Ballad of Dido recovers the story of the ancient queen told from, for the first time in almost two thousand years, her own point of view.

One of the reasons we know so little about the historical Dido is that the Romans were very thorough in destroying Carthage at the end of the Third Punic War. The only surviving sources of the story of Dido and the early Carthaginians come from Roman and Greek sources, and since the Romans and Greeks competed with Carthage politically and economically, those sources tend to serve propaganda purposes. At a time when female rulers were vilified (Dido was a grandniece of the biblical Jezebel), Dido stands out as an example of a strong female ruler who managed to lead her people to found a new home, and ultimately create one of the most successful city-states of the ancient world.

Which sort of begs the question, why are we telling her story through American roots music? The simplest reason might be because I'm a mandolin player and I like it, but my reasons run deeper than that. Being a mandolin player means playing a lot of folk and bluegrass tunes, and I can't help but notice the overwhelming sense of dispossession in this genre of music. Roots ballads tend to be songs of loss; loss of love, loss of home, and loss of family, and that is the same feeling that the ancient epics The Illiad, The Odyssey, and The Aenead all convey. Each of these is about someone, or an entire race of someones, who have been deprived of their home and loved ones, acknowledge their own impending deaths, and are doing all they can to just keep moving for another day to try to find a better life for themselves and those who they have left.

Roots music is the music of refugees, and in the war torn Mediterranean geopolitical landscape of the 7th and 8th century BC, just about everyone was looking for a safe place from the constant fighting. By and large the music of this period is lost to us, but those folk and bluegrass tunes, so familiar to our ears, capture the spirit of the heroes the Greeks and Romans wrote about two millennia ago.

We hope you'll join us for our productions of The Ballad of Dido this April, and stay tuned for dates, times, venues, and updates from the cast and crew!
Posted by Tony Tambasco at 8:09 AM No comments: