Meet the company of Cupid's Revenge

Travis Burbee (Agenor) recently relocated to New York and this will be his first full production in the city. He is thrilled to be a part of this unique and exciting production. Some of Burbee's most recent credits include Beethoven in Dog Sees God, Peter in Pinkalicious, Glaston in The Reluctant Dragon, and Eric in Runaways.

Jane Coty (Nisus) is a new actress in the Manhattan theater scene. Previous New York credits include: And This is How You Break My Heart (Ellen), Wolves (Eleanora), Ashes to Ashes (Rebecca), A Dolls House (Mrs. Linde), and Emotional Creature (Ensemble). Special thanks to all my teachers who told me I could. 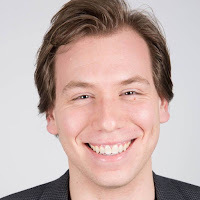 Lindsay Fabes (Cleophila/Urania/Citizen 3) is thrilled to be joining Bad Quarto Productions this season! She is a recent graduate of the University of Oklahoma's School of Drama, and was most recently involved in the Midtown International Theatre Festival as a Fight Director for Mescaline. Some of her other recent credits include Tribes (Sylvia u/s) at Barrington Stage Company, A Midsummer Night's Dream (Hermia), and Bonnie and Clyde (Bonnie/Blanche u/s). She would like to thank her family and friends for always supporting her. Love you all! www.lindsayfabes.com

Amelia Fei (Hidaspes/Citizen 1) is a recent graduate from The American Musical and Dramatic Academy in NYC. Her New York credits include Columbia University School of the Arts MFA 8 to 12 Film Festival: Leo's Education, The Intelligent Design of Jenny Chow (Jennifer Marcus), Into The Woods Parody (Quick Silver Productions). She is granted a BA in Western Literature in Taiwan, and is grateful to have this wonderful opportunity to being a part of the Cupid’s Revenge family. Endless love to her parents and friends.

Brandon Fox (Leontius) is from Wall, New Jersey. He is a recent graduate of the Rutgers, Mason Gross School of the Arts BFA program. New York credits include Romeo and Juliet at Gorilla Rep, Imagine at Theater for the New City and I Am Irish at the NY Winterfest. Rutgers credits include playing Demetrius in A Midsummer Night’s Dream at Shakespeare’s Globe in London, Gabriel in Gabriel directed by Christopher Cartmill and Mink in Sardanapalus directed by Knud Adams. 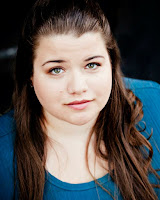 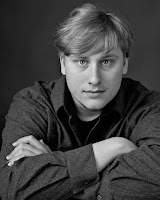 James Overton (Music Director; Telamon/Priest/Citizen 4) is working with Bad Quarto Productions for the fourth time, having previously appeared in The Life and Death of Jack Straw; Hamlet: The First Quarto; and The Taming of a Shrew. Other NYC theatre credits include: Twelfth Night with Swiftly Titling Theatre Project, Little Red in the Hood: And Other R-Rated Shorts, and And Then There Were None with Alpha NYC Theatre Company. James has also appeared with New Hampshire's Shakespeare in the Valley as Launce in Two Gentlemen of Verona as well as Oberon and Theseus in A Midsummer Night's Dream. James is currently a studying improvisation at the Upright Citizen's Brigade. He  received his Bachelor's Degree from Bennington College where he starred in Don Juan, and Myths and Hymns. 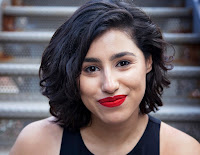 Marcella Pereda (Ismenus/Bacha’s Maid) is new to New York City, having moved here in September of last year. Recent regional favorites include Tis Pity She's a Whore (Annabella), The Skin of Our Teeth (Gladys) and the world premiere of Remington and Weasel (Kim). BFA, University of Utah. Learn more at www.marcellapereda.com.

Analiese Puzon (Fight Captain; Timantus) is excited to bring this crazy story to life with such a passionate and talented cast! Favorite credits include: Francine Skullvos Brendan, Pirate Navigator at the New York Renaissance Faire; Juror #6 in Twelve Angry Women, and Ermengarde in Hello, Dolly!. She is a recognized Actor/Combatant with the Society of American Fight Directors and is a graduate of the American Musical and Dramatic Academy in NYC.

Sabrina Robinson (Bacha)  is excited to reignite her passion for acting with the company of Cupid's Revenge! Known for being energetic and nice, Sabrina enjoys acting because she's able to explore the other facets of her personality and transform into an entirely different person. A Jersey native, she attended college and grad school in Philadelphia, and has lived in Manhattan for the past two years. She loves feasting on food and libations with friends, frolicking around the city, and snuggling her poodle.

Angelina LaBarre (Director)  is a director and professor at Contra Costa College. Recent directing credits with CCC include Exit, Pursued By a Bear; The Laramie Project; Almost, Maine; and The Complete Works of William Shakespeare Abridged. Other CA directing credits include The Merry Wives with Big Idea Theatre, Julius Caesar with Darkroom Productions, and Twelfth Night; The Sea Voyage; and The Merry Wives of Windsor with Roving Shakespeare. Angelina holds an MFA and an M.Litt. in Shakespeare and Performance from Mary Baldwin University’s partner program with the American Shakespeare Center, and a BA from Sacramento State University.

Anthony Vaughn Merchant (Fight Choreographer) is an experienced stage veteran with a MFA from The University of Kansas City. In addition to a laundry list of classical experience from Bottom to Tiresias, He has also made a number of appearances on screen for HBO, Hulu and Netflix to name a few. He has done the fight work for a number of companies including his notable wrestling match in CTF production of As You Like It which was praised by a member of the WWE. 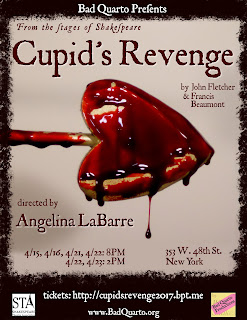 Posted by Tony Tambasco at 7:34 PM No comments:

The Jacobin revenge tragedy is not my favorite genre of play. The wanton bloodshed and downright spectacle of the pieces put me off, to be completely honest. In my mind Cupid’s Revenge or The Revenger’s Tragedy feel more in line with the films of Quentin Tarantino than the plays of Shakespeare. And while Tarantino's films and these plays have a lot to say about the world they spring from, that sort of extreme violence and simplistic morality parable meant having to work a little bit harder to find a human connection to Leucippus and the world Beaumont and Fletcher give us in Cupid's Revenge.


I had to work with the director to find where the heart of Prince Leucippus lay and why he is the way that he is. Most of the conversations that Angelina and I had centered on guilt. Leucippus falls victim to misplaced passion from the start, and his manipulation by the diety leads him to other, more fatal errors. His ardor for the moral improvement of Lycia, ultimately costs him his sister, his father, and his life. Out of Leucippus’ honest desire to have the best for himself and others comes tragedy. And it was the idea of his guilt for those past actions that opened Leucippus for me.

In my exploration of Leucippus' guilt, I found an even deeper motivation: disgust. Leucippus becomes disgusted with himself and with his world, but he never loses his sympathy. He plays out the role of the Christian martyr with great honesty and, I hope, moving grace. There has an acceptance of his death that is aspirational for me.

My first few weeks with Cupid’s Revenge have been a journey from disgust to intrigue to love. I love the characters for all of their faults and desperate needs. And that's what makes this a good choice for Bad Quarto Productions: whereas other companies might focus on gruesome spectacle, our method of production will strip away some of the artifice from the incidents and leave these characters bare to the audience, open to judgment or admiration.
Posted by Unknown at 9:29 AM No comments: