First printed in 1615, Cupid's Revenge is a tale of love, revenge, and mortal folly that was highly influential to post-Shakespearean playwrights. When the Duke of Lycia prohibits the worship of Cupid, the god of love decides to take revenge on his entire kingdom, putting the future of Lycia in peril.

Angelina LaBarre, a California based director and Shakespeare scholar will guest direct this lost classic of the English Renaissance this spring. Some of LaBarre’s most recent credits include Exit, Pursued By a Bear; The Laramie Project; Almost, Maine; and The Complete Works of William Shakespeare Abridged with Contra Costa College and The Merry Wives with Big Idea Theatre, and Julius Caesar with Darkroom Productions.

Our summer offering will be a production of the earliest printed version of Love's Labour's Lost, one of Shakespeare's early comedies that we know primarily through the Folio version. The first quarto of Love’s Labour’s Lost was printed in 1598. When the King of Navarre and his friends decide to isolate himself from the world to study philosophy, they think they’ve created the perfect way of understanding the world, but their plans are foiled when the Princess of France and her ladies arrive on a diplomatic mission, the four gentleman discover the weakness in monastic philosophy.

Alex Dabertin, who directed 2015's What, Lamb! What, Ladybird!, and has previously appeared onstage as Hamlet in our production of Hamlet: The First Quarto and as Polidor in The Taming of a Shrew, will direct this rarely performed version of one of Shakespeare's most beloved comedies. 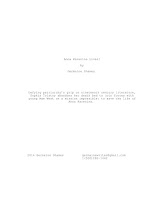 Our regular season comes to a close with Anna Karenina Lives! by Germaine Shames. Anna Karenina Lives! is a new musical comedy that sees a young Mae West Join forces with Sophia Tolstoy to save Anna and the Russian aristocracy from themselves through the power of love and vaudeville.

Bad Quarto Artistic Director Tony Tambasco, who most recently directed our production of The Life and Death of Jack Straw, will direct Anna Karenina Lives! this coming Fall.