Directing on The Life and Death of Jack Straw for the last couple of months has given me a new appreciation for the play. I used to think it was a decent, if overlooked play that gave us some insights into the politics of the time, and for our time, and might have helped us better understand Shakespeare's cultural relationship with his own history. Which are all great reasons for Bad Quarto to produce it.

But now I just think it's a really good play. 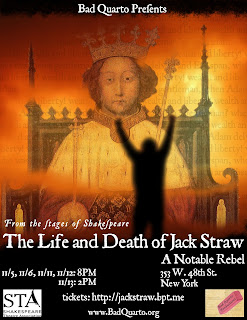 As I have worked with the Jack Straw company these past few weeks, they have brought such wonderful insights to these characters and this story, and they have taught me to see this as a play that is as personal as it is political: everyone in this world is trying to do right by their friends, their family, and their country, and the real tragedy of this play comes from those who lose touch with those first principles through greater and greater sins.

It really is fantastic, and I hope you will come see it.

Still, having come to this opinion, I am left to wrestle with some of the critical commentary available. For the record, there's not much. The Life and Death of Jack Straw was never connected to Shakespeare or any of his companies, and so it has more or less slipped through the cracks of those who study the plays and play-makers of Renaissance London. in 1923, W. W. Greg called Jack Straw "the mutilated remains of a play (qtd in Maguire, 265). In 1949, Mary Grace Muse Adkins said "Of the three extant Elizabethan plays dealing with the reign of Richard II and written within a few years of each other, The Life and Death of Jack Straw has received, and, artistically, deserves, the least consideration" (Adkins 57).

Even Stephen Schillinger, who feels that "if ever there was a play in need of reconsideration after the changes in the study of early modern drama, it's Jack Straw," also argues that "extant copies of the play are probably incomplete or error-ridden" and that "the play was initially printed with modest profit aspirations and without much concern for the specific content of the text" (Schilinger 87).

We know where I stand on Jack Straw's artistic merit: it is every bit as worthy of a place on stage as Shakespeare's Richard II, but Schillinger's last point strikes me as factually wrong. A couple features of this text stand out as being the work of someone who cared a great deal about its presentation.

This is the first page after the title page from the 1593 quarto, and what stands out to me immediately is that Actus primus at the top. Labeling a play by act was uncommon at this point in history. It was so uncommon that I don't believe I have seen other texts of this nature from the early 1590s that did so. Each of the play's four acts are noted, not only in their beginning, but also in their endings.... 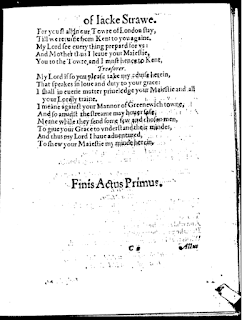 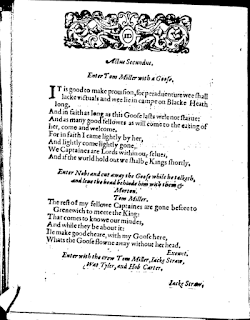 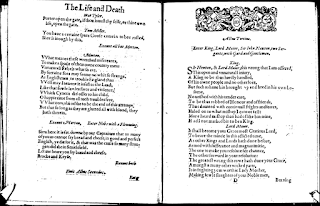 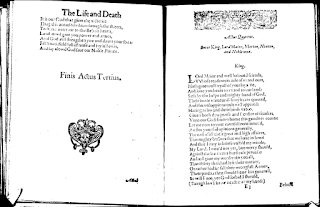 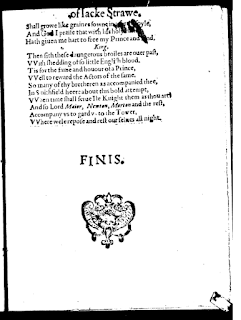 The amount of whitespace in the text is also surprising to me: that is space that could have been filled with text, which translates into paper that the publisher* didn't have to use, and money he didn't have to spend. Peter W.M. Blayney has shown that there was no such thing as a quick buck in the printing of playbooks, and so we should set aside any notions of easy profit from the start, but what Barley seems interested in selling is a moderately respectable looking play about one of the key moments in English history.

An even better example is in the king's pardon to the rebels... 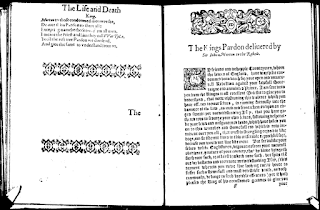 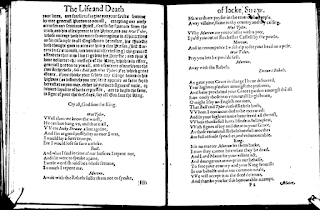 Note how the pardon itself is set apart from the rest of the play, both by white space and printers devices, and by a change in type-face. While the rest of The Life and Death of Jack Straw is printed in roman type, the text of the Pardon is printed in black letter, a type face used to re-create the feel of manuscript texts, and to further augment this effect, it even begins with an illuminated "M," just as you might expect from a sacred text. Danter (the printer) has done SUCH a good job convincing me that this was the actual text of the actual royal pardon that Richard offered to the rebels, that I was surprised to find that Froissart doesn't record anything close.

We often talk of reading, in the early modern era, being an oral/aural activity. People read aloud, even when reading privately, but publicly for entertainment. A literate member of the household might, for instance, provide an evening's entertainment by reading aloud from a book, a poem, or a play. But the text of The Life and Death of Jack Straw wasn't meant to be merely heard, it was meant to be seen. It has a high enough production value to be the kind of book that you would want people to know you owned, and to be impressed by. Or, at least, that was probably Barley's hope. But anyway you slice it, and whatever the motivations, there seems to have been a great deal of concern for the specific content of the text.

The Life and Death of Jack Straw is a great play, and I invite your argument or commentary on that point (especially if you come to see our production of it). Previous generations of scholars may have missed its quality, but whatever your feelings about the text, the amount of care that went into its presentation should leave little doubt that its publisher cared a great deal about what you think of it.

* I am using this term anachronistically.